Watertown's Juanita, Tana, Ron, Jay and Jerry (L to R) in Key West. Private highway tractors like the one pictured were used by the race teams to tow their superboats.

Getting to Key West

This year, the crew from Watertown made their way to the world championship offshore boat races in Key West Florida. It all began when Ron said he wanted to go. He didn't have to mention it twice before the planning was started. Part of the crew would fly to Orlando, visit the attractions and the Kennedy Space Center, then ride by van the rest of the way to Key West, taking the scenic routes known as the Tamiami Trail, Alligator Alley and the Overseas Highway. For the others, this would be the final 800 kilometer leg of the van's 4000 km journey southward from Manitoba.

The races have been a Key West tradition for over 30 years. The 6-1/2 mile race course there has a variety of surface conditions that challenge both the boats and the brave men who dare to drive them. Some areas are sheltered by land, others are fully exposed to the swells and wind of the open ocean. We were told by some locals that the wind seemed to kick up every year just in time for the races, this year being no exception.

For spectators, there was a long stretch of shoreline from Fort Zachary Taylor to the cruise ship docks that all the boats would race past. The docks, aka "the wall," had grand stands and concession tents with delicious Greek food, dogs and refreshments. Some people would watch from private boats near the race course. Typical of the Keys, the water glistened with beautiful patches of emerald green, reflections of the sandy shallow bottom. Everyone would have the opportunity to get a keen sense of the speeds, sounds, sights and smells of the sport.

Upon arrival the crew headed straight to Duval St., the focal point of shopping, food and entertainment for crowds of tourists. On this Friday evening, not a race day, the street was barricaded especially for the race teams. They had their boats and tow rigs lined up on a single lane so that race fans could get the closest possible look. The boats were great, even though none of them had any propellers installed which was probably for reasons of safety, if not security.

Jay wasted no time mingling with the racers. He met the Instigator, Rum Runners and WarPaint teams, just for starters, and was given some nice promotional souvenirs and a little insight into offshore racing.

Exhausted, the crew finally called it an early night, but what a night!

A Stroll Through the Pit Area 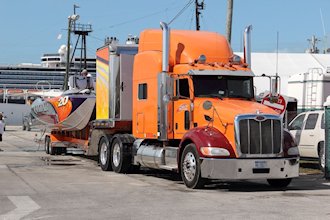 The Qatar team was well equipped in most every way.
Click pic for all pit area photos.

With the championships to be decided on Sunday, Saturday was a good day to tour through the pit area, which was open to most anyone for a small fee. The entrance was the same one which would be used to see the races. The weather this day was trademark Key West: warm and sunny.

The teams were generally busy working on their boats, but they were also promoting for their sponsors and surprisingly accessible. Despite the near absence of music that one would expect, the mood in the pits was quite festive. There was plenty of chat and many smiles that reminded you that racing events are what these people live for. Good thing, right?

If you wanted to, you could load up on a lot of free or purchased loot while walking around. There were promotional pens, screw drivers, floating key chains, golf towels, etc. and the Miss Geico team was even giving away shiny strings of some super cool gecko-head Mardi Gras beads. Those would be Gecko. Not Geico beads! If all of that wasn't enough, you could pull out your wallet and buy hats and clothing directly from the teams or Superboat International.

There were eight classes of race boats to see, such as Production 4, Superboat, Superboat Extreme, etc. The different boat classes were scattered among each other in the pits. This made sense, since many of the teams raced in more than one class. Of course, the Superboat Stock class was of special interest to us because all of the boats in this class were powered by Mercury outboards.

A lot of the boats were already familiar from Duval St. the night before, but this time a few were equipped with propellers. Five blade stainless steel cleaver propellers seemed to be the racers' prop of choice. These props were sharp and angular. It was interesting to see that even though two of the race boats were turbine powered, both of them relied on propellers for thrust, just like the rest of the traditional piston boats.

The huge concrete boat launch was full of activity. There were cranes, trucks and trailers on the move. Boats there were being test-run both in and out of the water. The pulsing spray of cooling water and the sharp sounds of the race boat engines at a mere idle were causing a lot of grins. Oh yeah! It was going to be exciting to see and hear them race. 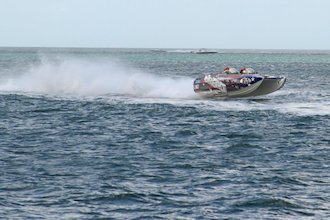 The races started at 10AM, so there was plenty of time for a morning coffee and some leftover pizza. The morning crowds made their way either to the rocky coast at Fort Zacharay Taylor or through the pit area to the wall. With the fort being a park, it had a separate entrance.

There were a number of races throughout the day, which would finish by about 3:30PM. Several boat classes raced at the same time and this filled the race course with action on every race. This meant there was a lot of overtaking and side by side struggles to take the advantage.

With multiple classes, there was more than one winner in each of the races. As a spectator, it normally wasn't difficult to figure out who was racing whom. Deciding who to cheer for was also easy after having met the teams over the prior couple of days. There would be no harm in urging on nice guys to finish first.

The races began with the boats circling to get on plane and to group the racing classes prior to running starts. Once they got the green flag, they roared to full power and the rooster tails were absolutely enormous under acceleration. In a short amount of time, they were already making their second turn on the race course to pass in front of the land-bound race fans.

The boats thundered by at a safe distance, but close enough to immerse the fans in a high volume wave of race engines sound. Every boat had its own distinctive pulse and tone. Some engines were firing on all cylinders while some were not. There were no false impressions hidden in the sounds; the engines that were practically singing were also leading their classes.

As the racing progressed, it became evident where you would want to be to see certain things. In front of the spectators at the fort, the boats were most often catching air and experiencing near blow-overs. For those watching from the wall, the racing was in calmer water and it was more about straight-line speed. But there you could also see the pre and post race activities between the pits and the race course. This would include things like the spectacle of the boats preparing to start and the crane recovery of towed boats that were inverted or wrecked. 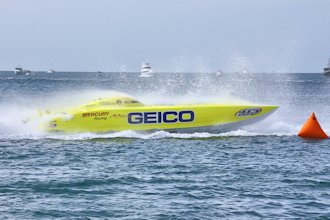 There was plenty of salt water in the air as Miss Geico caught other traffic.

Shortly into the race, it looked like the piston and turbine classes ran at similar speeds. But more impressive were the piston boats because of their louder classic racing sound. Within a few laps, one of the turbine boats was silenced as Spirit of Qatar had to stop in the middle of the race course. Fire and smoke came from one of her engine compartments.

The race continued and even though Miss Geico gained a significant lead over everyone including the Armor Mesh turbine, she ran like she was going for some kind of a record--flat out, lots of air and sounding strong. Meanwhile, Qatar had smoke still billowing, a number of people on deck and she was gathering the attention of rescue boats and a helicopter.

By the end of the race, it looked like Qatar finally had things under control with their fire out. Miss Geico took the win in Superboat Unlimited ahead of her rivals and was the only boat faster than the Armor Mesh turbine.

So that was all; it was time for the Watertown crew to start making their way back to central Florida and Lac du Bonnet with fresh memories of Key West. Key West was wonderful with its boat races, jet ski and scooter rentals, museums and relaxed atmosphere. Thanks to all the race teams for putting on such an enjoyable show.